Community Radio and its successful operation needs skill and knowledge of radio station management. the course is directed towards this objective. The learners shall learn the scope of community radio, the equipment used in the studio, transmission tower, antenna, cable, transmitter, its use and operation, basic operation, program code, type of programs, broadcast ethics.

During and post COVID, Community Radio is an excellent tool to impart online education 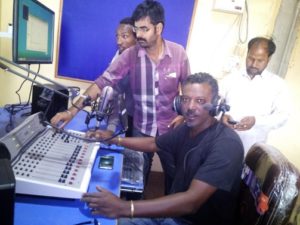 The challenge with the informed society is to communicate with people in their own language and impart knowledge and skill to enable them to earn their livelihood and improve their living conditions. The power of oral communication to impart knowledge is inherent in ancient tradition of many countries of the world. The ancient system of education in India has been by way of storytelling for knowledge, skill, introspection, critical analysis and self-realization which was considered the ultimate goal of human life. Aesop (5th Century BC) and Homer thrilled their audiences with oral tales ranging from the fall of the Trojans to fables. Osayimwense Osa and Hale both described the importance and functions of oral storytellers in western sub-Saharan Africa, the griots, which involved ‘advising, diplomacy, and instrumental music. Use of oral stories to convey messages embedded with knowledge has been common across most of the civilizations. The history goes back in time to days before people developed the ability to read and write. An evolutionary advancement of traditional systems is to integrate the modern technology to communicate with that segment of population which is still illiterate or suffering from digital divide. Community Radio with the dynamism and adaptability of life as lived in organic communities to support local economic development, social justice, and political empowerment. Variety of formats such as stories, rhymes, riddles and proverbs can be used.

A pilot to examine the use of Community Radio for education of farming practices was implemented in India by World Development Foundation. The program contents were based on following main themes.

There are no reviews yet.

Be the first to review “Community Radio” Cancel reply